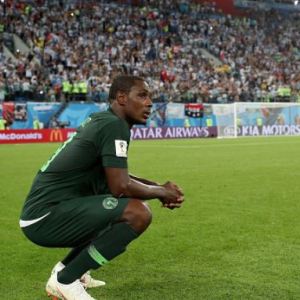 After his terrible performance at the Russia 2018 World Cup, Super Eagles striker, Odion Ighalo received messages of death threat that made the striker consider quitting the national.

“I know the fans want me to score goals. I understand them. But some of them took it to another level. They said a lot of things. To my innocent kids, to my wife, even to the extent that they threatened my life and the life of my family.

“You know women and how they react when you talk about their children. But I never said a word to anybody and I never replied anyone. My wife said ‘you don’t have to go there (to Nigeria) any more’. And I knew it was because of all what they said to her and to our family.” He said.

According to him, he didn’t quit because Eagles’ coach Gernot Rohr convinced him to stay with the team.

“I want to thank Rohr because after the World Cup and all those things happened, he called me before the Seychelles game and I told him I was contemplating stopping because it is not easy,” he said.

“But the coach had belief in me. He said ‘I know you are a good goalscorer and I know you can do it. Come and show them that you can score.’ If a coach believes in me, then I will come. I told him ‘coach, if I am in your plans 100 per cent then I will honour the invitation any time you call me.’

“He said ‘yes, you are in my plans for the games’. Then he said ‘don’t be under pressure, just go do your thing, I know you can do it.’ That gave me the confidence which I believed I needed. I want to thank him for defending me, and giving me the words like a father, encouraging me, talking to me. He gave me more belief and I thank God for repaying him with these goals.”

Ighalo faced criticism at the Russia World Cup after his poor performance against the Argentina side.