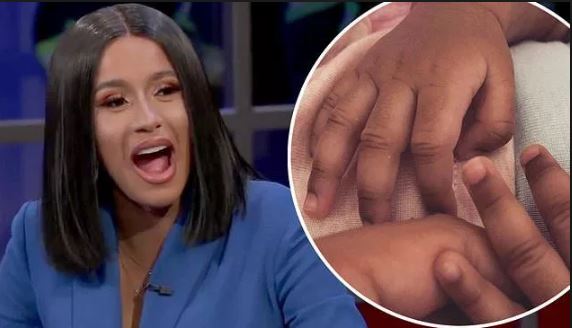 American popular rapper, Cardi B has revealed that her vagina broke while giving birth to her 3-month-old daughter, Kulture Kiari Cephus.

Cardi B gushed about motherhood and wished she had her baby Kulture when she was a teenager and also how things got tough during the birth of her child as she appeared on “Jimmy Kimmel Live” in New york, on Wednesday, October 17, 2018.

The 26-year-old during the interview, said that she feels like her daughter is what she’s been missing all of her life. She said;

“People just be like, “Oh, when you give birth it’s going to hurt,”but nobody tells you that like… your vagina…

“It was harder. than I imagined. She broke my vagina. Why nobody told you about those things? Nobody told me they were gonna stitch my vagina.” The rapper was also asked about her recent tweet, which saw her ask her followers if they’d be mad at her if she were to get pregnant again.

“Oh well, you know, people have mixed feelings,” before she added that she wants “three or four” kids.

“I do feel like I need a rest, but oh my god, the happiness that my baby brung me is just like I could just do this over and over again.

“This is what I was missing my whole life.”