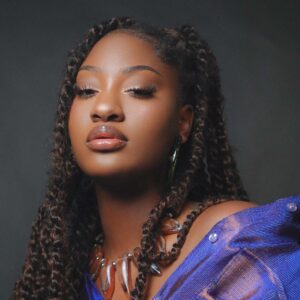 Singer, Temilade Openiyi, better known as Tems has made history as the first female singer to reach number one on the Hot 100.

Tems unquestionably was crowned the only female Nigerian artist in history to reach number 1 on the Hot 100.

Nonetheless, she has joined Wizkid who achieved the same great feat in 2016.

Last year, her collaboration with Wizkid earned her a Billboard Top 10 hit. With ‘Essence,’

Wizkid became the first African musician to have a song on the Top 10 Billboard chart as a lead artist, and Tems’ first Top 10 hit.

Tems has been unveiled as one of the featured artists in American rapper, Futures’ new album.

Months later, Tems collaborates with Drake and Future on the song ‘Wait For U,’ which appears on Future’s LP album ‘I Never Liked You,’ and debuts at number one on the Billboard Hot 100 – Future’s second, Drake’s tenth, and Tems’ first.

Advertisement
Future took to his Instagram page to share a list of the artists on his album and the list was quite impressive with Tems being the only African on it.
With American top singers like Drake, Kanye West, Young Thug, Kodak Black, and many more, Tems no doubt made us proud by being on the album.
Following the good news, Nigerians have poured out accolades on her for lifting Nigerians up music-wise.
See posts below; 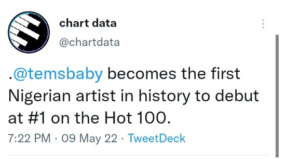