A young man amazingly talented based in Akwa Ibom state, known as Jaystan Okputu wow lots of people with the work of his craft by creating artwork of singer Davido.

It is not uncommon to see some of these creatives dedicate hours of work to create something spectacular in honour of Nigerian celebrities. 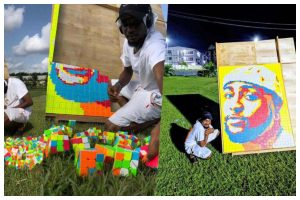 Explaining how he arrived at that point, he said it took him six hours and 800 individual pieces of the cubes to create the piece.

On why he chose Davido, Jaystan said the singer with or without his music has been a source of inspiration to many young people in the world including himself.
He further explained that the titles of the singer’s last two albums, A Good Time, and A Batter Time are a source of motivation for people to keep pushing.