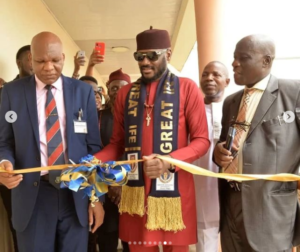 Popular Music Artist Innocent Idibia popularly known as 2baba has taken to his Instagram handle to share a post containing pictures where he built and fully furnished a music studio and had it donated to OAU.

He not only shared the post with so much excitement but also gave reasons why he decided to donate the music studio to the school despite having no ties whatsoever with it.

2baba said he always wished he had music as a course during secondary and tertiary days and that his goal is to donate more music studios to even more schools and then he called out to his colleagues in the music industry imploring them to join the noble cause. He ended the post with “I LOVE US”