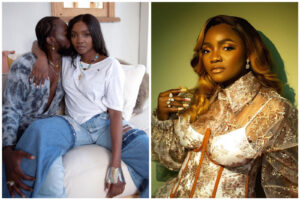 Singer Adekunle Gold has brandished his wife, Simi, by calling her “perfect” as she celebrated her birthday today.

According to AG Baby’s Instagram post, he gave Simi his card to buy herself a new bag.

“My angel from above

You’ve given me something special

It must be the reason why we align.

Baby, take my card buy yourself a new bag.

Simi started her career as a gospel singer, releasing her debut studio album in 2008, titled Ogaju.

The celebrity power couple had the cutest words to say as they celebrated their anniversary.

“3 years and you’re still the one I love oooh the one that I belong tooooo still the one I kiss goodnight. I love you my boy. I thank you for this journey. God really working overtime with us,” Simi wrote.

For Adekunle Gold, their marriage is the best decision he ever made.

“I thank God for the best 3 years of our lives. Doing this life journey with you is by far the best decision I have ever made. Thank you baby for changing my life forever. I love you Magic,” he wrote.

Adekunle Gold and Simi got married in January 2019 at a private wedding ceremony.

The couple welcomed their first child in 2020.