Angel Smith, one of the finalists of the ‘Shine Ya Eye’ edition of the Big Brother Naija, was seen in a video with DMW boss, Davido.

The reality tv star was recently seen hanging out with the show winner, Whitemoney and billionaire businessman, Obi Cubana.

Obi Cubana hosted the reality tv show stars following his ‘Man of the Year’ award celebration which took place at the Hustle & Bustle nightclub on Sunday.

Angel who seems to be on a tour of meeting top personalities in the country has been seen on a video that surfaced on social media recently where she was vibing with Davido the DMW boss.

They were dancing to Adekunle Gold’s song featuring Davido himself.

Screenshot from the video: 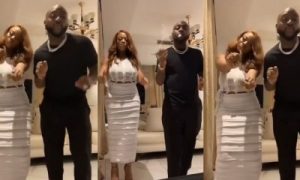