Maraji disclosed this a few minutes ago on her Instagram page.

While mimicking Nigerians on how they are always eager to see celebrities’ babies and their responses.

The new mom revealed her baby’s name as Jayden Mensah, adding that she respects women.

As expected, many Nigerian celebrities took to the comment section to congratulate Maraji.

oliveemodi wrote: Awwwww Congratulations. May this be a beautiful journey for you both.

Apparently, Maraji had earlier in March revealed the gender of her baby.

The heavily pregnant sensational skit maker revealed that she was expecting a baby boy.

She made this known in a cute video that she eventually uploaded on her social media page.

According to her, she has always wanted a girl, but God gave her a boy.

In addition, Maraji vowed to keep birthing more kids until she has a baby girl.

“My temperature is high

My baby is just the best

Did I tell you guys it’s a boy

I always wanted a girl, until I give birth to a girl I am not stopping. 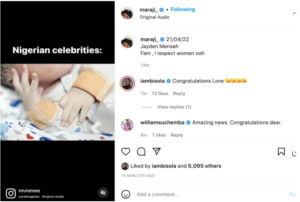