WEIGHTLOSS JOURNEY: Eniola Badmus Shares Before and After Photos With Davido 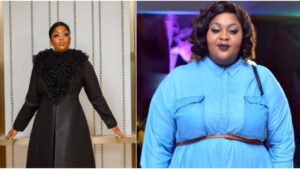 On March 8, 2022, the formerly plus-sized actress took to her Snapchat page to share an old photo alongside a recent one showing her appearance.

In both photos, Badmus was captured with her friend and top singer, Davido, and it made the difference in her stature clearer than ever.

The actress looked very puffed up as she posed with Davido in the first photo. However, the second photo she took with the singer showed just how much she had trimmed down.