Jose Mourinho was left incensed by VAR once again on Thursday after the men in Stockley Park failed to give Harry Kane a penalty during Tottenham’s goalless draw with Bournemouth.

The controversial moment came in the opening five minutes of the game when Kane was bundled over inside the box by Joshua King at a corner, with referee Paul Tierney waving play on despite replays clearly showing the infringement.

Mourinho was critical of Michael Oliver’s decision to rule out Kane’s goal against Sheffield United last week and it was Oliver again who decided there was nothing given in the game at the Vitality.

‘The game had the most important moment – you know when, you know who – and I don’t want to say anything more in relation to that because everyone knows and I don’t need to say much more. Everybody knows,’ Mourinho told Sky Sports.

‘The same referee that was the VAR against Sheffield United. In the world, everybody knows that is a penalty.

‘I am not saying that Harry Kane scores 100 per cent of his penalties, but it is very very high. Normally at minute five we would be winning 1-0 against a team in trouble, I think the game would be completely different.

‘Like Sheffield, the man of the match was not one of the players. But at Sheffield I could blame myself and the players, today I could not do that.’ 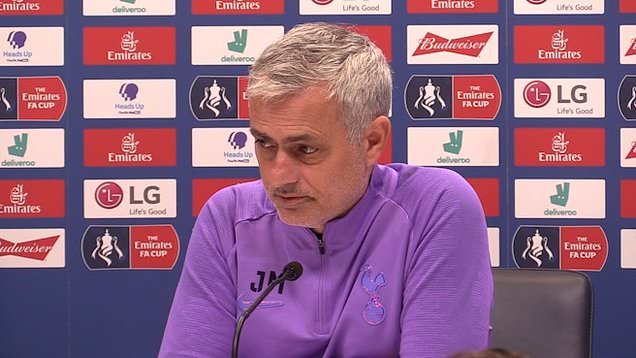 The Portuguese boss was no in the best of moods following the disappointing result, which saw him abruptly leave his post-match press conference following technical difficulties over Zoom.

After several attempts at asking a question, one reporter said: ‘Hello Jose, can you hear me?’

Mourinho then said, ‘no’ – before putting down his headphones and walking away from the media briefing without answering a single question.

His Spurs side then failed to register a single shot on target against the relegation-threatened Cherries as Mourinho’s squad ended up winless on the road for the sixth consecutive game in all competitions.