GBAS GBOS!! Portable Slams Promoter Billique, Who Try To Famz Him After Refusing To Take Him To UK

Written by Dashboard-Maxlagos on May 6, 2022

Portable has slammed show promoter,  Billyque in his recent post after he tried taking glory for bringing to a show in Dubai.

The call-out came after Portable posted a video of himself dancing with the money he made from a show in London.

Billyque took to the Portable’s comment section to advise him to take it easy so he doesn’t miss his flight.

He created the impression that they were going to travel together.

This did not sit well with the Zazuu singer, who quickly cleared the air about their connection.

Dr. Zeh informed Billy that he is not the one taking him to Dubai so he should learn to mind his business.

Portable also recounted how Billy promised to sponsor this trip to London only for Billy to leave him to take care of the bills alone.

He concluded by warning Billy to stop chasing clout with his name and let Sam Larry take him to Dubai as he promised.

Read the exchange below: 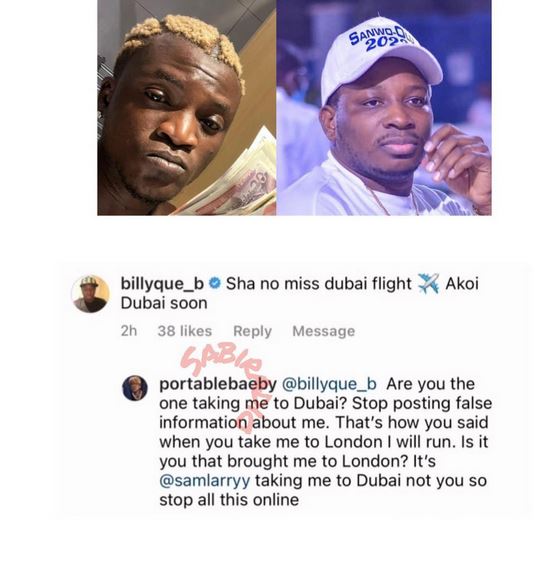