The year 2011 is one that would forever remain in the memory of popular singer, Adekunle Gold, as it was the year he lost his sister, whom he refers to as his best friend, to a heart-related disease.

In a chat with Saturday Beats, the singer recalled that although they spent a lot of money in a bid to get his sister well again, she lost the battle to the ailment.

“My sister was one of the few best friends I had but death took her away. She had a heart-related disease and I thought she could beat the disease but she did not make it. We sang together a lot and we shared the same dream. I was her best friend in the house, so it really shook me when I lost her. I remember her every year and reminisce about the great time we had together. I wish she was alive to celebrate my success with me because this was our dream.

“The funny thing is that we had the money; it was not that we could not afford to treat her, but it was just unfortunate that she died. If I was as popular back then as I am now, what would I have done differently? I do not think that I would have done anything differently because we spent money on her. I was at home when she died, so by the time I got to the hospital to see her, she had died.”

He further stated how ecstatic he was when he met with King Sunny Ade, who is one of his major influences in the Nigerian music scene. “A lot of times, I hear people comparing me with King Sunny Ade; they mention his name when they mention mine and that is an amazing feat. It is really great but like I always tell people, I would prefer it if people see me as Adekunle Gold.

“When I met King Sunny Ade and he was singing my song word for word, I was very honoured and humbled. It made a very great impression on my life. Who would have thought that King Sunny Ade would know my song and even sing it word for word? I am hopeful that we will collaborate to do something together. I have been working on it and I am hoping that it works out.

When asked about his marriage to fellow singer, Simi, Gold simply said, “What do you think?” 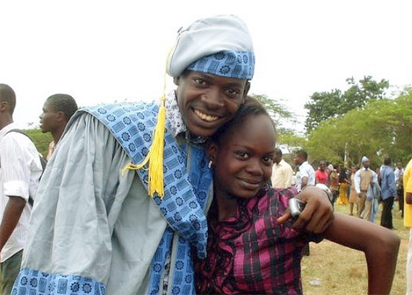