I cried because my daughter’s last name wasn’t going to be Momodu – Mother of Davido’s first child, Sophia Momodu

The first baby mama of Nigeria’s top music star Davido, Sophia Momodu has revealed what she did when she realized her daughter Imade was not going to bear her last name “Momodu”.

According to a post sighted on the Instagram story of Sophia Momodu, she disclosed how she wept bitterly because her daughter Imade could not bear her last name “Momodu”. She stated that she did all she could but to no avail.

Sophia in an Instastory post she shared, said she argued and cried because Imade got all her father’s name and not a “single letter” from hers.

She also disclosed that she pulled “all her feminist card” because it was quite painful to her. 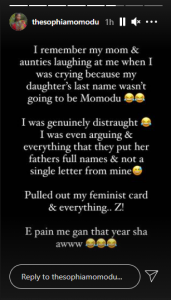