“I know the fans are already divided; I need to fine-tune my own sound.” -Mr. P.

“I know the fans are already divided; I need to fine-tune my own sound.” -Mr. P. 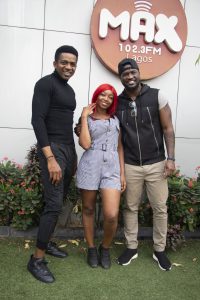 The singer talked about how it was easy for him to put the album together, in reply to MaxBreakfast co-host –  Mark Otabor, who asked what challenges he faced when producing the album.

“To be honest with you, this album has been very easy… Besides some things that were obstacles then… but I must tell you, in terms of the work, it was as easy as anything because, as an independent artiste, I know what I want,” he said.

He also mentioned that every other single he’d released were not on the new album.

“I knew the fans were already divided. I wanted to fine-tune and have my own sound… So what I was doing then was to release songs to find out what my fans really want.”

The singer revealed how the song “I Love You” came to be.

“I was in my house with American singer and television personality, Tamar Braxton… She said she’d like to meet with Simi and Teni, so I invited them over. I was playing my guitar, then they began singing: I love you… I love you.” I, immediately, dropped the guitar, went to the piano and asked them if we could go to the studio and they said ‘ok.’ In less than one hour, in the studio, we were done with the song.”

When we finished the recording, I didn’t send them the song until later. Teni then asked if I will release the song as one of my singles, I said “no, it’s going to be on the album.”