Peter Okoye trends as Nigerians compare him to Prince Harry who is standing up for his wife, Meghan Markle

Peter Okoye is currently trending on Nigerian Twitter as Nigerians are comparing him to British royal, Prince Harry, who has always stood up for his wife, Meghan Markle, in the face of her clash with the royal family.

On Sunday, March 7, an explosive interview Meghan and Harry had with Oprah Winfrey was aired on CBS. In the interview, Meghan and Oprah made several shocking allegations, including that the royal family made racial comments about their son, Archie, before he was born.

Since their wedding in May 2018, Meghan has received serious backlash from British media after reports of her and members of the royal family being at loggerheads. In the face of all the attacks on Meghan, Harry has consistently been there for her. He moved out of the palace with Meghan to settle in Canada after they couldn’t continue to take the attacks. They later moved to the U.S.

Peter Okoye came into the story after a Nigerian lady hailed Harry for being by Meghan’s side. The Nigerian lady opined that an Igbo man can never do such a thing. Her tweet reads

”I just love the way Harry is standing firmly by Meghan. Can never be an Igbo man

Ndi “My mother said I can’t marry from Imo state” 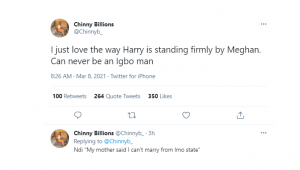 Some Nigerians disagreed with her as they immediately drew her attention to the fact that Peter Okoye stood beside his wife, Lola, during the faceoff he had with his brothers and other family members.
They pointed out that Peter cut ties with his Twin brother, Paul, his brother, Jude, stopped being a part of PSquare and did other things just to be with his wife, Lola who happens to be a Yoruba lady.
They praised Peter and mentioned that his actions at the time were underrated because it was from an African man. 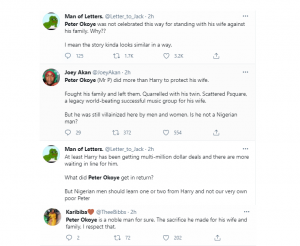 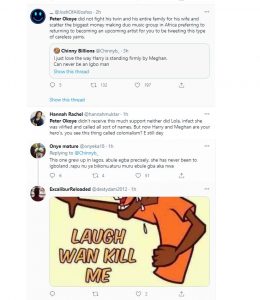 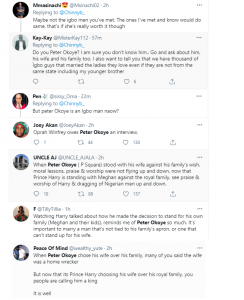