The number 10 jersey, a FIFA logo and a football were presented by the FIFA President during his visit to the Presidential Villa, the No.10 jersey is an iconic number worn by skilled footballers and notable footballers who have worn the No.10 jersey are: Pele, Diego Maradona, Zinedine Zidane, Ronaldinho, and Lionel Messi.

In attendance at the meeting, were the minister of youth and sports, Sunday Dare, and the President of Nigeria Football Federation, Amaju Pinnick. CAF also made known that its President will also be meeting with different stakeholders in Nigeria to discuss the progression of football in Africa, in women’s football. 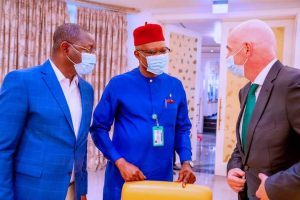 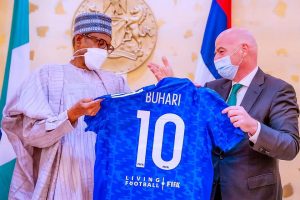