Comedian Real Warri Pikin is back to making her followers laugh as she shared a rare video that contained both old and new photos of herself. 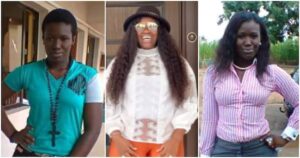 She took to her verified Instagram page to give her fans something to talk about as she released some never-seen-before photos of herself.

In the video, Real Warri Pikin appeared slim in the initial set of photos but transformed to a thick babe in the later part of it.

See comments by fans below: