Shortly after his wife Annie Dibia cried out on social media over having her first child as his fifth yet she met him before his baby mamas. 2baba went on to display his love and affection for his wife today on his Instagram page.

Annie Macaulay–Idibia is a Nigerian, model, presenter and actress. She was nominated in the “Best Supporting Actress” category at the 2009 Best of Nollywood Awards. Annie got married to the love of her life 2face Idibia in the year 2012 with whom she has two adorable children Isabella Olivia Idibia.

2face today went on to surprise and display his love for his wife. He said on one of his handles on Instablog:

“I’ve never been a fan of all this reality TV thingy but i must ask or rather point out the fact that whatever Annie felt she said it straight up to ‘whoever’. She never laughed with anybody and said different behind. That’s one of the many reasons i love this African Queen” 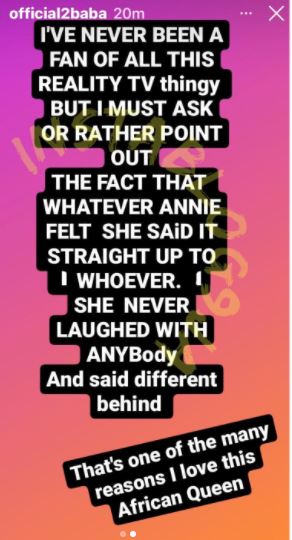 No doubt this couple are in love as we have seen them overcome challenges that was brought out in the open.