Annie Idibia, the wife of singer, 2face Idibia, revealed their second daughter, Olivia was recently operated on in a hospital in Dubai.

Annie made this revelation via her Instagram Stories. She said she hasn’t slept in 48 hours due to the surgery but her 6-year-old daughter has been “brave” and “strong” and the surgery was a success. 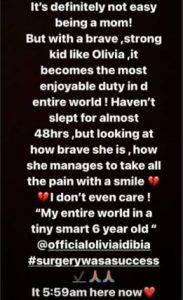 In February this year, Annie revealed Olivia is a “brave fighter” and has been through a lot for the past three years.
Advertisement

At the time, she shared a video of Olivia with a bandage on her leg and called her “10 boys in 1 girl”. She added that “she’s fought for the last five months” yet her battles haven’t taken the smile off her face. 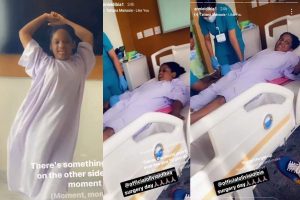