Written by Dashboard-Maxlagos on January 8, 2021

DJ Cuppy recently revealed that it has been 10months now since Zlatan Ibile blocked her off his social media platforms and she questions why. The two teamed on one of DJ Cuppy’s hit single, Gelato. DJ Cuppy has revealed in the past that she gets very little support from her colleagues in the Nigerian Music industry, and this shocking revelation from her as shared on her micro-blogging platform has further confirmed her claim.

“months later and I sometimes still wonder why

blocked me on WhatsApp and Instagram without ever saying why; we were actually friends …AND “Gelato” was a hit!“ 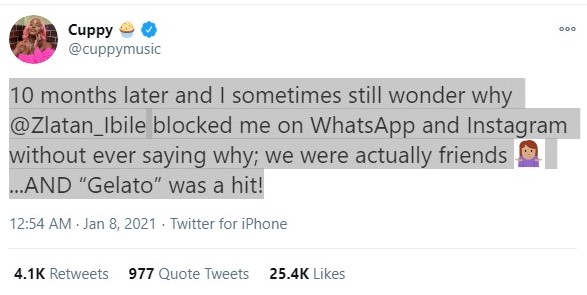