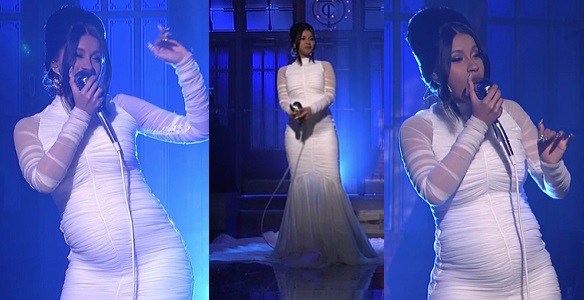 Cardi B has finally confirmed that she is indeed pregnant after much speculations that the rapperis expecting a child.

The 25-year-old rap star flaunted her baby bump during an appearance on the weekly comedy show, “Saturday Night Live.” This comes one day after Cardi B released her rap debut album which happened to be one of the most anticipated rap debut albums in the last few years.

Cardi B took the stage twice on the comedy show, giving teasing views of her bump which she concealed with a fulsome feather boa while performing her breakout single “Bodak Yellow.”

During her second appearance, she performed “Be Careful,” a track off her debut album “Invasion of Privacy,” which was released on Friday, March 30, 2018. Cardi B donned a body-hugging white dress for her second performance, putting her bump on show.