The celebrant took to her Instagram page today to post amazing pictures of herself and captioned it ‘Sassy since birth, Extra candles in my cake’.

Liquorose who clocked 27 today has definitely made herself and her fan base proud. They have all taken to Twitter to show how much of a queen she is and how proud she should be of herself for bagging so many deals and attaining so many levels of success all in her 20s.

The dancer and brand influencer proved to be quite a fashionista as she rocked a gold feathered mono sleeve, mermaid-like, fitted yellow gown, in new pictures, which she shared on her official Instagram page. 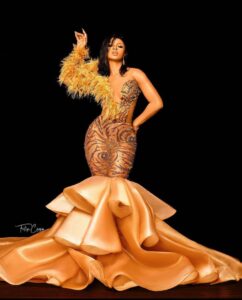 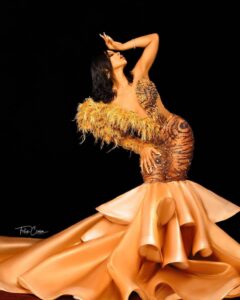 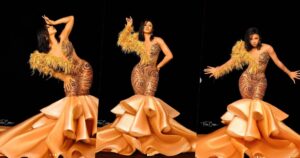 The see-through sheer dress was designed with studded embellishment.

She also sported side-part shoulder-length hair and flawless makeup. The fall of her lustrous hair made her overall look so glamorous.

The classy photos from her birthday shoot received tons of commendations from colleagues, fans and family members.

Ex-Big Brother Naija housemate, Roseline Omokhoa Afije a.k.a Liquorose was treated to a good life by her fans as they showered her with cash gifts to celebrate her 27th birthday. 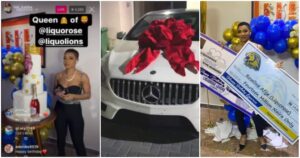 Liquorose’s 27th birthday caused a lot of talking on social media and the highlight of the day appeared to be when the BBNaija star was presented with two Mercedes Benz GLEs for her to pick one from. In a video making the rounds, Liquorose was seen getting emotional after the two cars were brought before her and she had to pick one.

It goes without saying that a number of Nigerians were awestruck at the great love Liquorose received from her fans.

Read some of their comments below:

“Where all this fanbase people dey see money? Everything hard o.”

“She get fans no be life …na all of us gather contribute the money.”

“Na all these things dey make govt think say we as citizens get money for this country fans oooo where una dey see this money?”

“Are you playing? What kind of playing is this?” Nice one.