Chike – I have never said ‘I love you’

I have never said ‘I love you’ – Singer, Chike

Singer-songwriter, Chike-Ezekpeazu Osebuka, known as Chike says he has never used the word ‘I love you to address anyone.

Chike who nevertheless disclosed that he is happy he gets to sing it, said he has never used the word ‘I love you because it is just too vulnerable and his ‘bolz’ would shrink and maybe disappear if he says it. 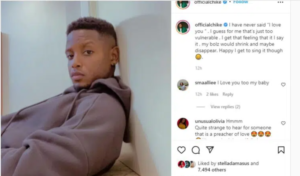 “I have never said “I love you , “I guess for me that’s just too vulnerable.

I get that feeling that if I say it, my bolz would shrink and maybe disappear. Happy I get to sing it though 😌.”

Weeks ago, Chike has sparked online reactions after surprising a bride at her wedding.

The video making the rounds online captured the moment Chike stormed the event and sang one of his songs.

The bride could not contain her excitement as she repeatedly screamed because she was shocked when she saw the singer.

This generated reactions from netizens as some frowned over the action of the bride, saying it seemed she had a crush on Chike, while some defended her, stating that the singer might be one of her favourite artists in Nigeria.

mylagosdiary_ wrote: E be like say she get crush on Chike pass the husband

4funcomedian wrote: Na from there you go dey go house with am…. And that Chike must collect

timipere03 wrote: For the people saying it’s embarrassing and forming woke, the husband knows she loves chike and his music, that was why he was invited, besides we all have a favourite musician

blacq_nelly wrote: If my wife try this, she will follow Chike home thank God I’m a woman shaaaa

daezy_obi wrote: At least she’s screaming and holding her husband tight and not holding Chike

Nkechi Blessing gives reasons why her marriage crashed, says husband is a beggar