‘Essence’ by Wizkid Ft. Tems records over a million units sales in US

The summer song of the year, ‘Essence’ by Wizkid and Tems has now recorded over one million unit sales in the US.

Essence is a track on the,’ Made in Lagos’ album by Wizkid featuring Tems which was released in 2020 amongst other tracks in the album, Essence has broken records as one of the first songs to acquire such a milestone. 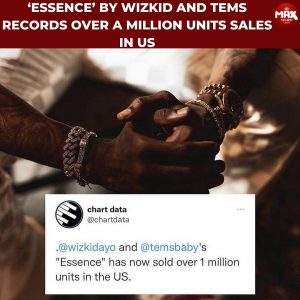 As part of the records, it once peaked at the No. 1 spot on US Urban Radio charts, entered Billboard Top 100 songs chart, entered top ten songs on Apple Music US Chart, and also made it to the top 200 songs Shazamed songs in the world.