Nobel Igwe steps out wearing boxer shorts and a jacket

Fashion blogger, Nobel Igwe has received several criticisms for stepping out for an event rocking a Jacket and boxer shorts.

The media personality wore shorts for the outing with his wife on Sunday, May 8, 2022 to AMVCA’s fashion show as well as other events.

I knew she was going to look pretty in pink but trust me to be legs ahead.” 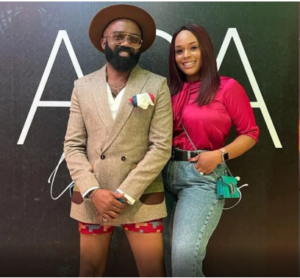 His post led to lots of reactions from Nigerians who wondered if Noble Igwe was mentally okay for wearing such a combo.

Noble Igwe, had some time ago reacted to the recent viral report of a ritual killing involving four teenage boys in Abeokuta, Ogun State.

He recently tweeted that the desire for wealth stems from how Nigerians celebrate questionable and ill-gotten wealth in the country.

“Every day, we are on different pages of people we know that they cannot afford certain things shouting ‘God when’, then come here (on social media) to act surprised that people are doing evil.

Our society does not question the source of anything.

He went further to say; “In most clubs, it’s only bottle services.

They don’t sell cocktails or beer, but when people order expensive drinks, music is shut down to deliver drinks to one person or group.

People would kill or commit crimes to get such treatment”.

“Some people will post three skits in a year and then post a house they just bought; people will appear in movies then post ‘new me, new home’.

The Thing is we celebrate all types of questionable wealth.

“The Church will take donations from anyone with money, the village will crown anyone with money, no questions asked. Families don’t ask their children how they make their money and some don’t care. It’s the society that feeds this monster