A cryptocurrency trader, Linus Williams Ifejika, aka Blord has taken to his social media page to boast after defeating the Economic and Financial Crimes Commission in court.

Breaking the news via his Instagram account, @blord_official, to his 1.5 million followers, the chairman of the Blord Group posts:

“I finally defeated and deflated @officialefcc in Federal High Court. My cars and properties (have) been released to me. Never believed at my age I will be fighting the Federal Government but I have to fight for what is mine. This is proof that the Nigerian justice system works.”

It was gathered that Blord back in August 31, 2020, was arrested by EFCC in his home in Awka, Anambra State and wrongly paraded alongside 14 others accused of internet fraud.

In addition three of his cars were initially impounded but the anti-graft organisation later released one to him while withholding his two Mercedes Benz cars and other properties.

A few months later, the leading bitcoin trader had sued the EFCC at the Enugu State Federal High Court, and proceedings had commenced since then, stretching over more than 15 months before final judgment was delivered in his favour in May 2022.

Blord, who broke the news of his triumph on May 7, 2022, credited his victory to his supporters and legal team. “Big thank you to everyone that cared and a big big shout out to my legal team. You guys worked tirelessly to achieve this,” he stated in his Instagram post. 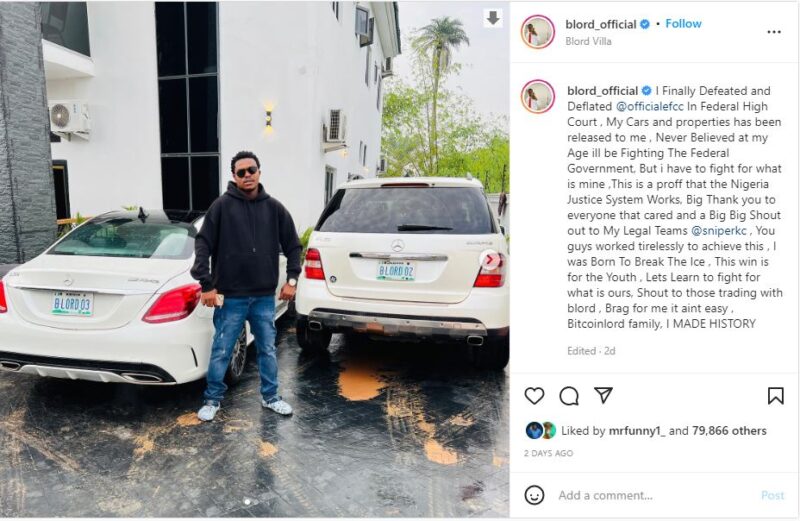