Discussed on the Max Breakfast show today was the story of an upcoming music artist Boi Amani who took to his social media handle to state that his wife farting in front of him is grounds for divorce in his books.

It began after a Twitter user wrote: “We dating is not an excuse to fart around me, you are just dirty and lazy.”

Boi Amani responded: “Even if we’re married and you exhibit that disgusting behaviour around me, it is bye-bye to the marriage.

“There are things I will never get used to and this tops the list.”

When Twitter users told him he was being unrealistic, he doubled down and insisted he will not condone farting in his presence.

He wrote: “That’s for you and your family, if una like make una shit inside una mouth, e no concern me.

“I know what I want and I stand by it, I will marry someone we both think alike, period!” 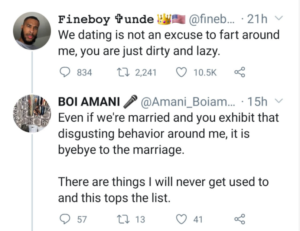 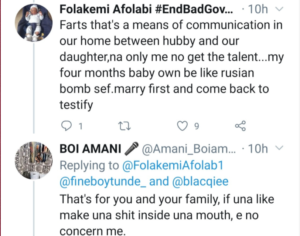 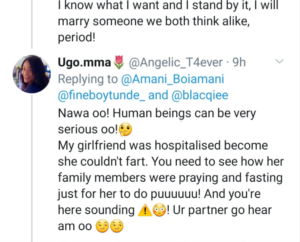 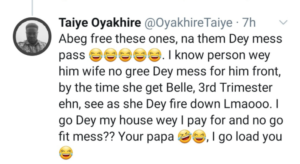