If I don’t feature in your next album, don’t talk to me again -Tekno teases 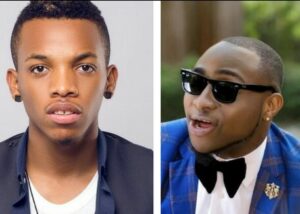 Tekno has just dropped a hint that he may be featuring in Davido’s upcoming project.

Nigerian singer and songwriter, Tekno, has made a playful threat to his colleague, Davido.

Apparently, Tekno has known his wish to be in the next body of Davido’s project.

He told them that he may feature in Davido’s new album.

The ‘Pana’ composer and singer, however, instructed Davido to stop talking to him if he doesn’t get to on the album when it eventually comes out.

“@davido if the new album come out and I no dey inside don’t talk to me again,” he tweeted.

When released, the project will be Davido’s first since the release of his third studio album “A Better Time,” in 2020.

Recall that the duo have been music partners dating back to year 2013 when Tekno featured Davido on a single titled “Holiday.”

Also, Davido has severally credited Tekno for writing his comeback hit “IF.”

In a 2020 interview, OBO as fondly called, said, “Tekno brought me back. I didn’t have a hit for almost a year, bro. You know wetin happen, Tekno dey tell me say, ‘David, I get one song oooo…’

“But me, I like jaye… I dey club. One day, Tekno came to Quilox to drag me. I’ve never met anybody that wanted me to do a song that much. Tekno wrote it, there’s also a Tekno version of the song. He dragged me to his house and we recorded it while I was drunk.’ The next morning he called me, ‘O.B.O, this thing na hit o…’

It remains unclear what role Tekno is expected to play on the soon to be released album.