The reality TV star Kim Kardashian has ignored all the Kanye West drama around their nasty divorce and his recent rants about how she’s raising their four children.

Kim took to social media to share cute photos of herself and her daughter, North West, rocking matching pink pyjamas. Kim’s sister Khloe also took to her timeline to tell them how cute they looked in the mother and daughter images. 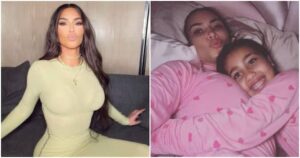 Kim Kardashian is seemingly not interested in all the drama that her estranged hubby, Kanye West, has been causing on social media. The stunner is enjoying spending her precious time with her beautiful kids.

Taking to Instagram, the stunner, who is currently going through a messy divorce with the US rapper and baby daddy, captioned her pics with a two hearts emoji.