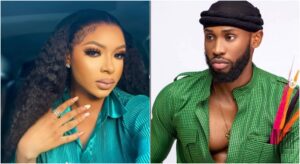 Liquorose has stated that she is single after she was asked in an interview.

Afije Rose Omokhoa aka Liquorose has stated that she is single.

This is coming days after it was alleged that she broke up with Emmanuel because of some cheating allegations after a controversial blogger,

Cutie Julls alleged that the first runner up caught him in Dubai with a male partner.

According to the blogger, Rose was upset and had called off the relationship.

“So let me go straight cuz this ship hurt me emotionally.

So we have confirmed the reason why this ship stopped sailing was that Ross caught Emma cheating with a male partner.

As in, Emma does both. He is Bisexual. Rose was very hurt and she called off the relationship.

Honestly, we wish her strength. Catching your partner cheating on you can be very traumatizing.

This one really hit cuz it was a male partner.

We respect people’s sexual orientation choices but honey, don’t lie about it. Let your partner know the deal.

If he or she is game, bingo. We wish both if them best”.

During a recent interview,

was asked if she is single and without hesitating, she affirmed her singleness. “I am single”, she replied.

there had been speculations that the relationship between Emmanuel and Liquorose had crashed, and it became evident when the latter completely ignored the former on her birthday.

Emmanuel also shunned the birthday party of Liquorose, where fans wanted to surprise them with the money they had contributed to them.

However, the fans put an end to the speculations as they stated that there was no more relationship between the two reality TV stars and had resorted to sharing the money they contributed.