The Argentine professional footballer, Lionel Messi scored his first goal since he joined the Ligue 1 side.

Early this year, Manchester City and PSG both fought for a place in the final. The two teams have separately conquered Ligue 1 and the English Premier League repeatedly.

An early goal from Senegalese professional footballer, Idrissa Gueye, gave PSG a lead in the first half of the Tuesday night match.

City boys had put up amazing touches and made several attempts to break PSG’s defence line but to no avail, as the home team seized the night with all lucks. 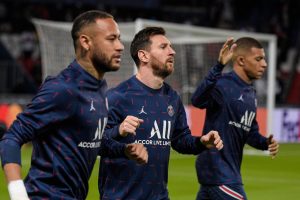 Mauricio Pochettino’s plan seemed to work to perfection. While still hopeful of making it a draw game, Messi’s 74 minutes goal took off the wind out of City’s sails, courtesy of fine touch from Kylian Mbappe.