Rihanna has officially joined the Billionaire Club, Forbes announced that the mogul is now worth an estimated $1.7 billion thanks to her many business ventures, including her #FentyBeauty empire. 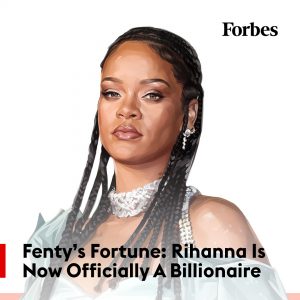 According to Forbes, with her new billionaire status, Rihanna has become the wealthiest female musician in the world and second richest female entertainer, as she follows behind Oprah Winfrey.