Inetimi Timaya Odon, better known by his stage name Timaya, is a Nigerian singer and songwriter. He hails from Odi, Bayelsa state. Timaya is the founder of DM Records Limited.

Timaya made a shocking reveal on his social media page recently as he revealed dumping his old girlfriends for a new baby. He further introduced his new baby to every one as FERARI 458 Iconic with stunning pictures. His caption reads: 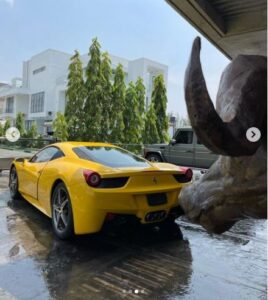 The 458 was touted as the successor to the F430 but originating from a completely new design, using technologies acquired from Ferrari’s Formula One experience in the company’s first official introduction of the car. Magneti Marelli invented the body computer system.

The only transmission available on the 458 is a 7-speed dual-clutch automatic gearbox by Getrag, in a different state of tune shared with the Mercedes-Benz SLS AMG.[8] There is no traditional manual option, making this the first mainstream model to not be offered with a manual transmission.

Congratulations to Timaya on his the arrival of his new baby.