Davido has continued to prove himself to be a down to earth person who supports upcoming talents.

Just recently, the DMW boss featured in a comedy skit with a comedian known as @viperthewiper_ent and it has made the rounds online. 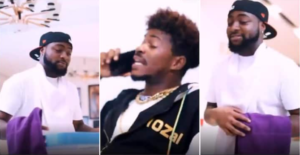 In the skit, the award-winning singer and billionaire’s son played the role of a houseboy in the trending clip.

The clip showed Davido acting as a chef in his boss’s house and serving his food. However, the boss wasn’t satisfied with the meal and proceeded to insult him before promising to sponsor him to a catering school abroad.

However, all of these happened in his high state imagination as Davido gave him a hot slap to bring him back to reality. The boss happened to actually be the singer’s servant in the skit.