Nigerian music artist Paul Psquare of the famous Psquare has taken to his social media handle to address Nigerian comedians.

The Oscar Awards slap incident between Hollywood Actor Will Smith and Comedian Chris Rock has become a global topic after Chris Rock made a joke about Will Smith’s wife Jada Pinkett Smith being in “G.I. Jane” because of her shaved head. As a response, Will took to the stage to slap Rock.

In his post, he also stated that Nigeria likes to copy-paste. 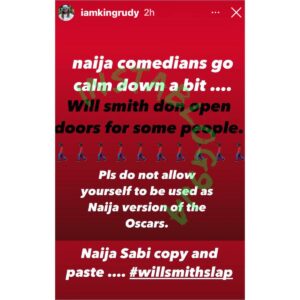