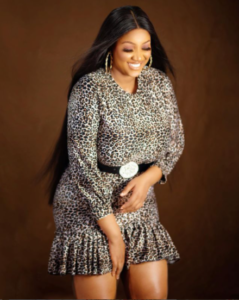 Uchechukwu Judith Muoghalu who is better known as Judy Austin has reacted to different reactions after it was revealed that she is Yul Edochie’s second wife.

Nollywood actor Yul Edochie announced via his verified Instagram page that Judy Austin bore him a son and thus became his second wife.

“It’s time for the world to meet my son.
His name is STAR DIKE MUNACHIMSO YUL-EDOCHIE.
Born by my second wife @judyaustin1
And I love him so much, just as much as I love my other children,” he wrote on Instagram.

This led to different negative comments on her Instagram page, in a swift response, she wrote, “I am not ashamed to say I am nothing without you, Jesus. Have a wonderful day bunnies.”

Yul Edochie and Judy Austin have been a pair for a while now, as he always directs the movies she produces.
And rumours have it that their relationship kicked off, during one of their productions, then one thing led to another and Judy Austin became pregnant. 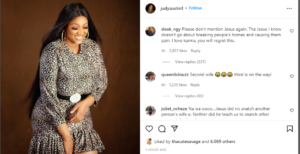